Being grounded in the community is an important way of honouring this Canada/ Northern Turtle Island-wide month. Please have a look for local options you can engage and support through public signage, donations, practical assistance, and your respectful presence. Get to know your Indigenous neighbours and treaty relationships, so that you and your ministry can be fully present as appropriate. Large and small, public and private, our support as the church matters.

Reflecting on the importance of this time, Moderator Richard Bott writes, “I find myself reflecting on what a heavy year it has been for First Nation, Inuit, and Métis peoples and their families and communities. Another of far, far too many heavy years… As the summer solstice approaches, I look forward to joining First Nation, Inuit, and Métis peoples as they celebrate their resilience and strength. I look forward to attending celebrations of their rich culture, language, and traditions when my presence as a settler is supportive, rather than intrusive.” Please read and share the full reflection here. 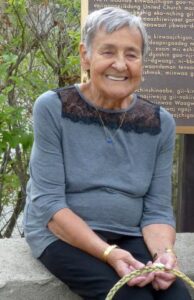 Alberta Billy on the 30th anniversary of the Apology, in Sudbury, Ontario, in 2016. Credit: Kelly Buehler

As we journey through this month, we also honour Alberta Billy, the We Wai Kai Elder who in 1985 demanded that The United Church of Canada apologize for its role in colonization and the loss of Indigenous languages, culture, and spirituality. She passed away on June 13, 2022. The Moderator and the General Secretary offer their deep condolences to Alberta’s husband Dan, their family, and their community. Please read and share the news here. In August 1986 the Apology was offered at the Sudbury General Council, and was heard and acknowledged, but not accepted. (All texts related to the Apology are found here.) May we ever honour elder Alberta’s memory by living into the Apology

Moving Forward Together, Marking the 30th Anniversary of the United Church Apology to First Nations People, is a video available here. It’s a conversation with Alberta Billy, the Very. Rev Bob Smith, Pam Hart, and Lawrence Sankey about how the Apology came to be, and what is needed to make it real. A written reflection on the anniversary is here.

Alvin Dixon Fun Run/Walk 2022: Click here for details. We are encouraged to take part in the Alvin Dixon Fun Run/Walk in connection with General Council meeting, anytime between June 17 and July 25. This is to raise money for the Alvin Dixon Memorial Fund for Indigenous post secondary students, especially those attending places like VST and Sandy Saulteaux. Alvin was a respected elder, teacher, bridge builder, and advocate from the Heiltsuk First Nation who contributed deeply to the Indigenous church and to the wider United Church of Canada.

Sunday June 19: Indigenous Day of Prayer. Click here for a new service of worship by the National Indigenous Council; please use freely and with gratitude! There’s also a comprehensive list of great resources here.

Tuesday June 21: National Indigenous Peoples Day. Please look carefully at local gatherings; show up whenever and however you can; use your community of faith signage, space, and budget to lend your public support.