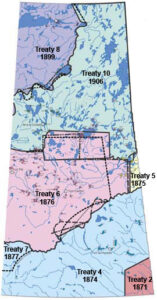 After consideration of past and current United Church apologies and commitments to Indigenous peoples, the Executive will sign on to a coalition letter to the provincial government that expresses strong concerns with the ongoing sale of “Crown” land to private groups. In 2017 the former SK Conference wrote a letter to the provincial government, expressing strong concern about exactly the same issue, and reminding the government of our shared Treaty responsibilities and our commitment to healthy lands and waters.

Now, the Treaty Land Sharing Network notes that, “Since 2007, the Saskatchewan government has sold nearly 2 million acres of Crown land that previously belonged to the people of this province. This land – totalling an area twice the size of Prince Albert National Park – includes formerly protected grassland, wetlands, and aspen parkland that are the territories of the Cree, Saulteaux, Nakota, Dakota, Lakota, and Métis Peoples.

In our commitment to honour the Treaty relationship, protect natural landscapes, and ensure that all people have access to land for both leisure and livelihood, we call on the Saskatchewan government to halt the liquidation of public land.”

Communities of faith and individuals are also welcome to sign on to this letter. Here is the full text. If you decide to do so, please contact treatylandsharingnetwork@gmail.com and Regional staff Julie Graham at jgraham@united-church.ca